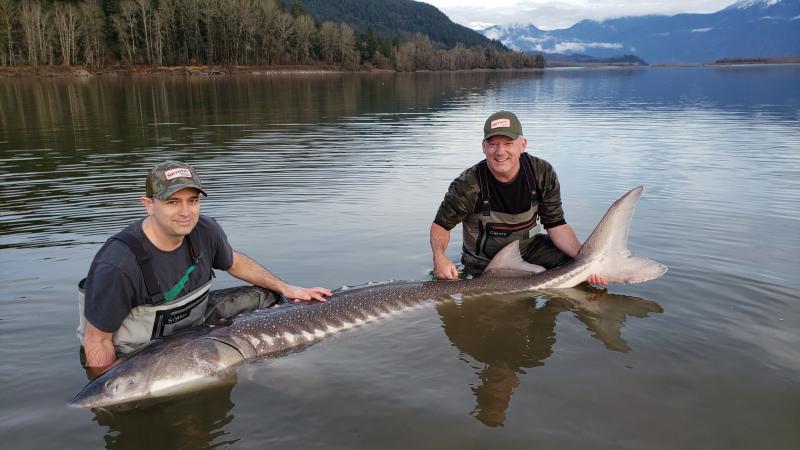 Sturgeon Fishing Is The Best

I have gone fishing all my life. My family didn’t have much money for travelling, so we camped and fished.  Living on Vancouver Island, we had the luxury of beautiful scenery, amazing salmon fishing & many lakes for catching trout.  During my younger days (in the 80’s), we did a fair amount of salmon fishing in the Georgia Strait on my dad’s 14 ft aluminum boat.  Not too good of a rough seas vessel, so we had to pick and choose our days to be on the salt chuck.  But the fishing was often good.  Growing up, we fished for trout most often as part of our camping trips. Upper Campbell was our lake of choice.  We had a little known spot at the time where we could camp without much of a crowd.

As time went on, the salmon fishing dried up.  Our favourite camping spot on the lake became a place where people decided it was a great spot to camp 3 months at time, create a mess, or just have big weekend parties.  End result was that the crown-owned property was blocked off and the camping area shut down.

While I don’t get fishing as much any more, I still enjoy being on the water.  I live in the Vancouver area, so it’s tough finding any good fishing.

Then I was introduced to sturgeon fishing on the Fraser River…

It was a sturgeon fishing tournament put on by a bunch of hockey guys.  We had a sturgeon fishing guide connection at the rink.  We paid a very reasonable fee for a half day sturgeon fishing. There was about 30 or so of us.  It was several years back now, so I don’t remember how many sturgeon were caught, but I remember a couple of the guys caught one over 7 ft long.  I caught a 6 ft sturgeon which I thought was a monster at the time.  My largest fish to date before that was about a 10 lb Chinook.  Well, I was hooked.  We were taught about sturgeon conservation and our guide demonstrated how to handle the fish without hurting them.  You can’t keep sturgeon, but that’s OK.  It was about the thrill of the catch. Catch & Release fishing is more like a wrestling match, where you shake hands afterwards and both go your own way.

Since this time, I have gone sturgeon fishing several other times. My trip last year with Yves Bisson Sturgeon Co resulted in an 8ft 1inch dinosaur.  The fish weighed nearly 300 lbs. What a fight that was!  At the end of it, my arms were hurting.  I got no sympathy and no help from my fishing buddy that went with me.  I was on my own.

There’s nothing like catching the world’s largest fresh water fish.  The Fraser River White Sturgeon has no rival when it comes to size.  Some say they don’t really fight.  Those are the ones that have never caught a sturgeon.