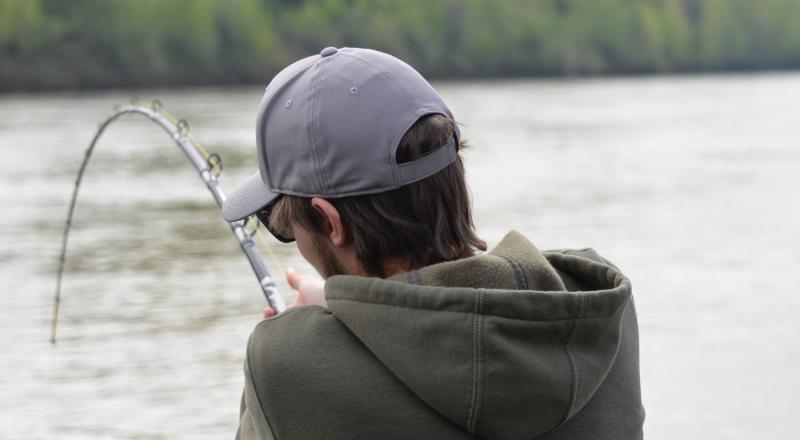 It was a marginal day in April – not too cold, but overcast with the threat of rain. I’m not a morning person, so Fraser River Sturgeon Fishing Guide, Yves Bisson, graciously accommodated a 9AM start time.  We left from a boat launch along a quiet side channel of the Fraser River.  We brought our own lunches today which consisted of ham & cheese buns, some home made cookies and chips, with water and Coke to drink.  Yves also provided several snacks and drinks as he normally does.  We probably should have had Yves provide the lunches though.  I’ve seen the photos of the barbequed lunches he provides – simply amazing!  But because we were only going out 1 day, we wanted to maximize the time to catch sturgeon.

Growing up on Vancouver Island fishing all my life with my grandfather, I love the water, nature and of course the thrill of the catch.  My uncle called me up with the offer to go Sturgeon fishing with him in Vancouver.  I had to say yes, as I’ve never caught any fish more than a few pounds.  This was a day to definitely shatter my fresh water fish record.  The Fraser River White Sturgeon is the largest fresh water fish in the world and due to strict fishing regulations, we are able to fish for them on a catch & release basis.  Yves Bisson is also very involved in the White Sturgeon tagging program. Yves himself has tagged about 20,000 fish.

It was a weekend, so there were a few guide boats on the river.  Yves has been a sturgeon fishing guide for over 15 years, so he knows most of the great spots for the big ones.  That’s what we were after – quality vs quantity.  A ways upriver, we settled into our first spot, anchored and let out the lines and waited. We watched some eagles, other boats going up & down the river and enjoyed being away from the sounds of the city.  First location was a bit of a bust.  We missed hooking a good sized sturgeon, but it wasn’t on the line long enough to say much about it.

After a while, we decided to move further upstream.  Because I was the only one who hadn’t caught a sturgeon before, the first fish was mine.  What a surprise.  Although not as large as some of the sturgeon in the Fraser River, it was a beast to me.  The 5+ foot beauty put up a good fight and my forearms were burning after the 10 minute fight.  I probably should have listened to the others on the boat telling me to keep my arms straighter when winding in the fish!

We alternated turns catching sturgeon as the day went on.  Only focusing on the locations where the largest fish were, meant more time to recover before the chaos of bringing in more fish.

We hooked my second fish at our guide’s third sturgeon hot spot.  It wasn’t much longer after we put the lines in the water.  Again such strength in a fish.  Another 10-15 minutes of winding, and another 5+ footer.  Wow, my arms were killing me after that.  We checked (and recorded) the tag number in the fish sling along the side of the boat and released the sturgeon back into the water.

It was a fabulous day of fishing sturgeon on the Fraser.  Being close to Vancouver, we don’t really appreciate that this really is a fantastic fishing experience.  I’d go again in a heat beat.

Yves Bisson is a Sturgeon Fishing Guide on the Fraser River.  He has been guiding for almost 20 years.  For more information about sturgeon fishing excursions contact Yves directly.