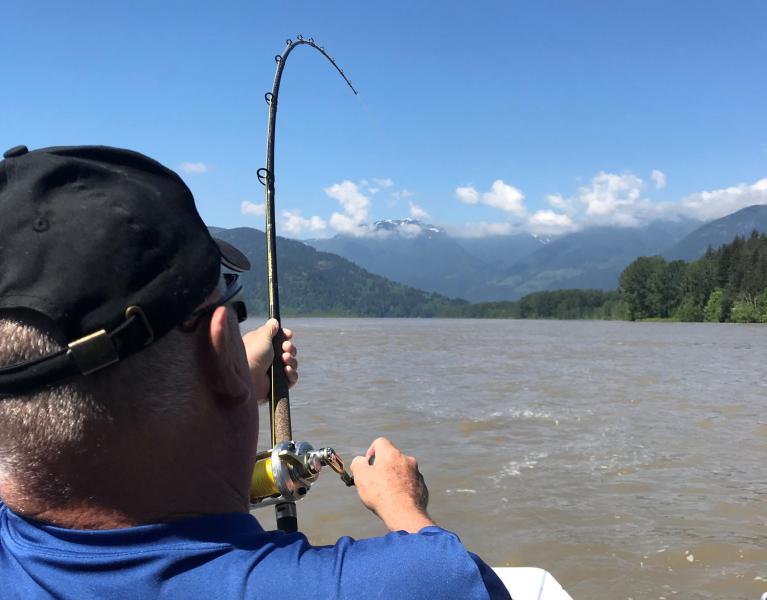 What do you get for the father in-law that has everything for his 60th birthday? My brother in-law and I decided the best answer to this question was sturgeon fishing. Our father in-law has fished for salmon all of his life. He would take his boat over to Vancouver Island every year to fish and always came back with a haul of fish and stories of the great experience he had. He had never been sturgeon fishing though and I knew that this would be a different experience for him and one that he would love.

We met at Tim Hortons at first light, grabbed our coffees and headed to Chilliwack for our day on the water. I was surprised at how only an hour outside of the city was a place that felt like a new world. Instead of traffic, lights and noise, it was just us and our guide Yves on the water surrounded by mountain views. Even the busyness of the boat launch was a thing of the past after a 30 minute boat ride up river to the spot Yves had for us. 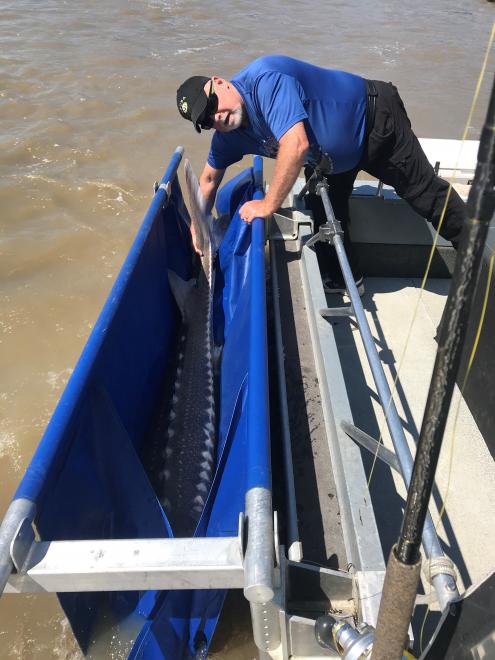 With us all sufficiently caffeinated and having arrived at the spot Yves had picked out for us, we decided that the first rod to hit would be for my father in-law. Being May, the water in the Fraser was high so Yves warned us that it could take a bit more looking before we found where the sturgeon were hanging out. Almost as soon as he gave us this warning our first rod hit. It took everything in my father in-law to not try and set the hook right away. Yves had us wait until just the right time and then boom, the hook was set. After a few minutes of hard work trying to get the fish to the boat it turned and headed down river. All my father in-law could do was hold the rod and watch the yellow line unspool from this reel. Knowing that he’d have to eventually get it all back in caused him some frustration and caused my brother in-law and I to hold back our laughter. He had always told us how great of a fisherman he was, now was his time to land the biggest one of his life. Bringing the fish back closer to the boat was a struggle but paid off when Yves yelled “it’s gonna jump” and then we saw the sturgeon pop out of the water and thrash around. My automatic reaction was to start guessing at its size. I guessed five to six feet while my father in-law insisted that it had to be bigger, even six to seven feet, based on the fight it was putting up. Finally he was able to fight the fish into the blue sling on the side of the boat for measuring. At just over six feet my father in-law was relieved to have hauled in his first sturgeon, but probably even more proud to have guessed the right size, most likely because it meant I was wrong and vindicated his hard work. Yves had us check the fish for a sturgeon tag and we recorded its number and measurements.  Then it was time to get our waders on so that we could get our pictures taken with this massive animal. This would serve as proof to our wives that our story of the “big one” was indeed true.

The water was chilly but at least we were dry in our waders. The sturgeon was surprisingly calm and just sat there in the water as we posed for pictures. Its soft skin and intricate design was something to see. After a few quick pictures and admiring our first catch it was time to let it swim away and try for the next one.

Almost right after returning to our spot we continued to get hits, which for some reason I kept messing up trying setting the hook and losing the fish, until I finally got one on the line. My brother in-law got the next one and we cycled through trying to rest our arms while watching each other struggle to get the massive fish to the boat.  Anytime the fishing slowed down Yves would move us to another spot and sure enough the hits kept coming.

Arriving home with sore arms and stories of our day on the Fraser reminded my wife of growing up and hearing her dad talk about his trips to the island. It was awesome to find something that we could do to celebrate my father in-law's 60th that was more meaningful than a tie or dinner at a restaurant. Now I hope our next day on the water is just as fun.