A Day Of Huge Sturgeon 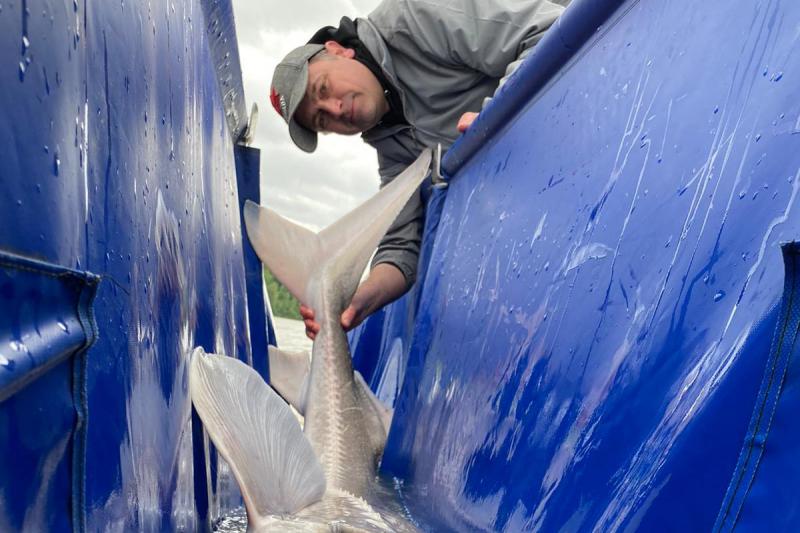 It was a fairly chilly day for May.  But a bad day of fishing is better than a good day at the office. So I was excited to go out with expert Fraser River Sturgeon fishing guide, Yves Bisson.  I’ve gone fishing with a few other guides and Yves is just way better.  The last guide I used could only find us 1 juvenile sturgeon – in 8 hours of fishing.  Let’s just say I didn’t use him again…

Yves asked us if we wanted to fish for quantity or quality.  Myself and my 2 fishing buddies didn’t hesitate to go for the big fish.

We met at 9AM, at a boat launch on the Fraser River in Chilliwack.  Yves was ready and we left on to our first spot a bit up the river.

I’d say within 20 minutes, we had the first bite.  We were taking turns with 3 rods out, Mitch getting the first chance.  Sturgeon bite differently based on what bait is used.  Different bait works at different times of the year.  Yves fishes sturgeon every day, so he knows what to use, and where.  He knows where the fish are hanging out on a day-to-day basis.  Yves knows if it’s a big one, even before the hook is set.  Under Yves’ guidance, Mitch sets the hook at just the right time.  It was a huge sturgeon.  Mitch takes the position ready for a tough battle.  For a larger sturgeon, it’s a good idea to use a foam piece at the end of the rod. Let’s just say it minimizes the discomfort between the legs.  So that’s what is done before he assumes the fish-fighting position.

So Mitch starts the fight with the fish.  You can tell when a fish is going to jump, as you can see the line go to the surface.  Well, after a run, this fish turned towards the boat and jumped.  We estimated this sturgeon to be between 8 & 9 ft long.  I say estimated, because as it jumped, it spit out the hook.  Thanks for the meal it seemed to say, but I gotta go!

That’s what sturgeon do – what many large fish do. They jump and shake their heads. They create slack line and that allows them to become unhooked.  Lesson learned.  Well, we knew this lesson, but sometimes the fish just win.

Mitch’s chance for the first fish was over.  Nigel was #2.  No mistakes here.  The 6ft 11 inch beautiful sturgeon did what it could to shake free, but Nigel won the battle.  A short but great fight, and the fish was measured, scanned and released for another day. 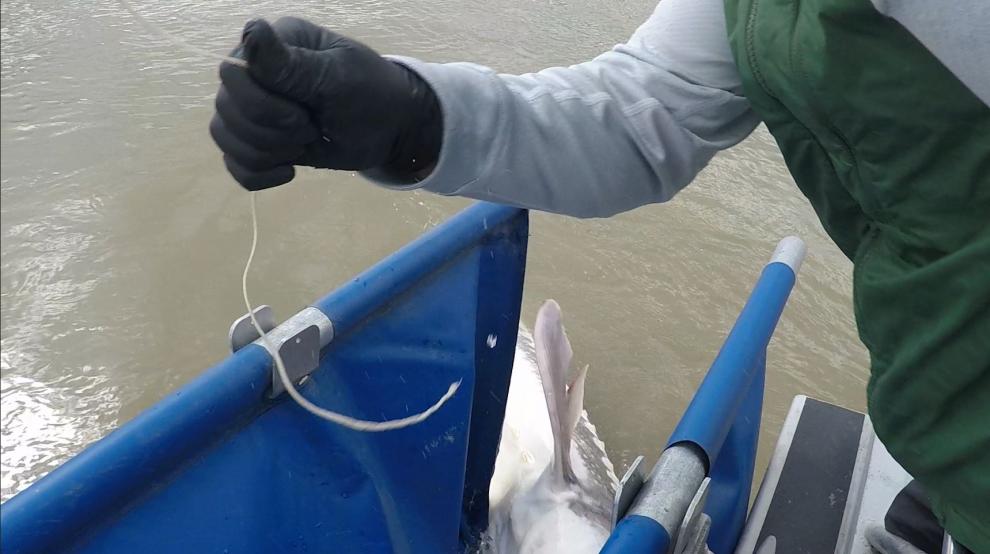 Lucky Catch - The line broke at the boat.  We still managed to measure & record the fish before safely releasing it!

I was next to see if I could bring in a big one.  It didn’t take long to hook up.  Another beauty.  It took about 100 yards of line and jumped well back of the boat.  Wow – probably an 8 footer, 275 pound white sturgeon, as Yves estimated.  I wasn’t going to let this one go.  “Keep the line tight, keep the line tight” I was saying in my head.  “Don’t let this fish spit the hook”.  15 minutes into the fight, I thought I was winning the battle.  The sturgeon then started swimming towards the boat and then jumped.  That’s when the line went one way and the fish the other.  Ugh! Fish 1: Willy: 0.

But 3 fish over 7 feet in a couple hours is amazing.  We spent a bit longer in this location and went up the river.

In our new spot, the water was quite fast due to spring runoff, so we couldn’t anchor where we wanted.  We changed up our bait and fished about 40 yards from where we wanted, knowing catching a monster sturgeon would be less likely.  After a couple 4-5 footers, we decided to go back to the calmer waters.

Back closer to our original spot, I managed to hook, and land a 6ft 6 inch sturgeon.  Mitch managed to lose another nice fish (I hope he doesn’t read this article).

As our day was nearing an end, we tried one more spot, closer to our boat launch.  Another one of Yves’ secret spots.  Then it happened.  I was up.  We could tell it was a big sturgeon the way it was biting.  I timed the hook set and the fight was on.  Immediately the fish took off downriver.  45 seconds later (I have the video footage to prove it), the fish stopped running.  The fish almost spooled the reel.  We pulled the anchor and heading downstream after the fish.  It was at least as big as the other sturgeon that got away – so I’m saying 8ft+.  (ask me again and it will be 9+ feet). It was a good 15- 20 minutes of back & forth as we drifted with the fish.  You may expect a happy ending, with me taking a photo with a 400 pound Fraser River Sturgeon, but no…  this fish got away.  End of story.  But at least I had the enjoyment of the fight. And the fish got a meal out of it.

Bottom line is that we had 5 sturgeon that were well over 6 feet on the line, in 1 day of fishing.  All 5 fish we landed were over 4 feet.  Where else can you get that in the world?  Nowhere – except in the Fraser River, about 1 hour from Vancouver Canada.  White sturgeon are the biggest fresh water fish in the world. Fishermen come from around the globe for the experience. And I know why.

Just make sure you get the right guide!